“Who Invited All of These Old People?”

.
Two weeks ago, I attended my 35th High School reunion – and lived to tell the tale…..

Paul, Rebecca, and I drove down Friday morning, and got to the Houston area just in time to help out with decorating the place where the reunion was going to be held (my best friend and her husband had volunteered to help, so we tagged along). It was nice to see a few of my old classmates and catch up on what they’d been up to in the time since we last saw each other.

After we were done with our part of the decorating, we met some more friends at a local restaurant and had a good time chatting about “the old days” over drinks and Mexican food.

On Saturday morning, we tried to sleep in late, but Rebecca had other ideas (she usually does…), so we got up and ate breakfast instead. There were plans for a tour of our high school, so Becky and I decided to check it out – thankfully my Mom had sent one of her walkers home with Sarah a couple of months ago; it really made it much easier for me to get around (Myasthenia and hot weather don’t play nice together).

Then it was time for the big event – It was great seeing all of my old friends; while this was “technically” the Class of 1978’s reunion, the planners opened it up to include other classes, so we got to see friends from other classes as well. 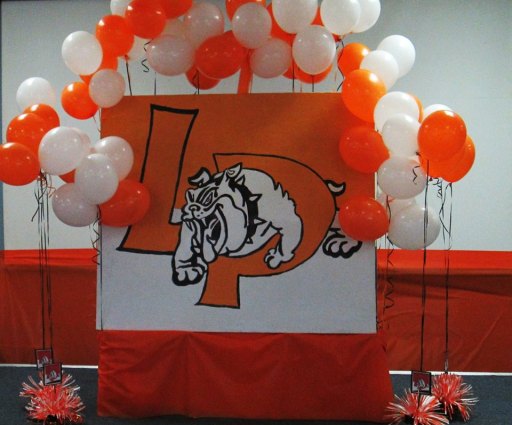 .
Lots of people put photos that they had taken at the reunion up on Facebook, so I decided it might be nice to put together a video to commemorate the event.***

I took the liberty of including some pictures from our old yearbooks as well; while a couple of the old pictures (I think I counted 4) include people who were not members of the Class of ’78, the overwhelming majority are of people from our class who were, with a couple of exceptions, at the reunion.

I matched old and new faces (or should that be “young and old” faces?) wherever possible – for best picture quality, you’ll want to watch the Full Screen version:

As you can see, everyone who was there had a LOT of fun – and we can’t wait to do it again!

***This is only my second attempt at putting together a YouTube video, so be gentle with me 😛

A short, fat, over-the-hill, happily-married mother of 4 daughters. I know just enough to get myself in trouble....
View all posts by Teresa in Fort Worth, TX →
This entry was posted in A Wretched Hive of Scum and Villainy, Contemporary, Humor, Just Because, Messin' with my kids, Music, Texas and tagged High School Reunion, La Porte, Old People, Texas. Bookmark the permalink.

18 Responses to “Who Invited All of These Old People?”