Way back in 1979, I had the honor of meeting a man who came to mean a lot to me over the next 34 years.  I had just started seeing a fella who very quickly asked me to spend the rest of his life with him (I said “Yes” before he could change his mind); not long after that, he took me home to introduce me to his parents.

And that’s when I met Charles Henry Koch.

I wanted to make a good impression, so I put on a nice dress and a pair of fancy shoes for that first meeting.  I needn’t have bothered – Mr. Koch never cared much what a person looked like on the outside; he reserved judgment until he figured out what a person was like on the inside.

I’m not sure what he thought when he first saw this innocent-looking little miss:
.

Paul’s dad seemed like a nice enough man; it wasn’t long before I figured out where Paul got his offbeat sense of humor.  I should have gotten a clue when I first saw the mischievous twinkle in his eye; if ever a person should have worn a T-Shirt that said “Here Comes Trouble”, it was Charles Koch…..

I was a city girl, used to a certain level of formality; Mr. Koch had grown up with 4 brothers and 3 sisters, and he had 5 children of his own – it was Every Man For Himself when you were raised in a Koch household.

The first time I sat down to dinner with Paul’s family, I patiently waited to be passed the various bowls of food; Mr. Koch laughed and told me, “If you’re waiting for someone to pass you some food, you’re going to starve around here.”

The next morning, when I sat down for breakfast – bleary-eyed and still half asleep – Mr. Koch reached over and playfully pushed on my arm (which made me start to tip over), then grabbed my arm and pulled me back into an upright position.  He said, “See that?  I just saved your life!”

A few minutes later, he did the same thing, then said, “Well whaddya know?  I just saved your life a second time!”

And that was the beginning of a beautiful friendship….. 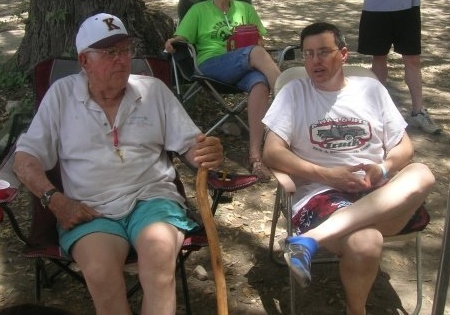 No fly was safe when Charles Henry was in camp…..

A few years later, when I was pregnant with Rachel, we were trying to come up with names for her to call each of her different grandparents.  We tossed a few ideas around, but we were having a hard time coming up with one for Paul’s dad – none of the ones we tried out seemed quite right.  Then one day I was watching the movie “Shenandoah” with Jimmy Stewart, and I heard the perfect “Grandpa name” for Mr. Koch.

Katharine Ross played Jimmy Stewart’s daughter-in-law in the movie, and the character that she played (Ann) had just given birth to his first grandchild.  She loved her father-in-law very much, and she affectionately called him “Papa Charlie”.

From that moment on, Charles Henry was “Papa Charlie” to all of our girls (and also to me).

Papa Charlie left us two years ago.  All of his children were able to be by his side when he took his last breath.  We were all so grateful that his passing – while hard for those of us who knew him – was so peaceful.

I loved him so very much; I miss him even more.

Thanks for all of the wonderful memories, Papa Charlie – and thanks for “saving my life” all those years ago ♥♥♥