Just a couple of kids…..

.
It started in a lecture hall at Texas A&M University in January, 1979. Yours truly was a freshman who started out in Pre-Med, but after one semester – and a tearful call home – I had decided to change my major to one which involved more math: Civil Engineering.

Well, the powers that be in the Engineering department told me that the Calculus class that I had placed out of as a Science major wasn’t really “the same as” the one they wanted Engineering majors to take, so I had to start all over again. I hadn’t changed my major until the spring semester started, so I missed the first “official” day of that class.

The next time that class met, I was sitting in a seat in the lecture hall, feeling quite lost since I didn’t know the professor’s name, office hours, etc. Some guy came in a little late to the class, looking all harried, and sat down in one of the few empty seats – right next to me.

He looked like someone I had met a couple of months earlier (which is why I thought he sat there), but I was busy taking notes, so I didn’t get a chance to get a good look at the guy. I did, however, glance over at his notes, because he had all of the professor’s information written down where I could see it.

Since I really wanted that information, I kept looking over at his notes from time to time so that I could copy down what I needed to know. I thought I was doing a pretty good job of doing that unnoticed, but one time I glanced over, and the word “KOCH” was written at the top of the page I’d been looking at – and it hadn’t been there before.

“Nah”, I thought to myself, “you just weren’t paying attention. That was probably there the entire time, but you just didn’t see it.”

Well, class ended, and I turned to the guy, and said the name of the person I THOUGHT he was, but as soon as I saw his face, I realized my mistake. I apologized for the mix-up and went back to my dorm to have lunch.

Over the next couple of weeks, though, this fella struck up a couple of conversations with me. It turned out that he lived off campus, and the bus that he caught to get to his place picked him up at the corner right by my dorm. So we got in the habit of walking to my dorm after class and talking.

He was a sweet guy; really funny and very nice. He was from a very small town, and me – being from a larger town – found his “innocence” (for lack of a better word) quite charming. Actually, we were both pretty innocent, so we got along very nicely.

Well, one day he worked up the nerve to ask for my phone number. Actually, the conversation went more like this:

Me: (Being a smart-aleck) Yes. (Thinking to myself as soon as the words were out of my mouth, “You dummy! Now you’ve scared him away!”)

Him: (Taken aback at first) Well, can I have your number?

Him: (Pulls out his pen and his checkbook from his pocket) Okay.

Him: (Writes number on spine of checkbook) Thanks.

We got to my dorm/his bus stop, and parted ways. I went to my room, and told my suitemates that a guy had asked for my phone number. Then I waited by the phone. And waited. And waited.

HE went to his next class, told his buddies he had gotten this girl’s phone number, and asks them if he should call me that day, or wait until the next day to call.

One of his buddies said, “Make her wait!”, so I didn’t get that phone call until the next day.

Well, the day he got my number was February 12th, and I remember thinking that maybe, just maybe, I would have a date for Valentine’s Day that year.

This sweet kid from the country calls me up the next day (Tuesday, February 13th), and asks me if I want to go out.
On Friday.
To the midnight movie.

I really didn’t want to see the movie, but I really, REALLY wanted to go out with the guy, so I said, “YES!!!!!” (only I tried to sound really nonchalant about the whole thing).

Mr. Innocence says, “OK, I’ll come pick you up at your dorm room around 11:30, and we can walk to the Student Center together.”

Well, we finally worked things out (his roommate called him an idiot, and told him how a date was really supposed to go, so we met earlier that night for dinner – which is another story in and of itself).

The rest, as they say, is history. Thirty-five years later, we’re still together, and I have truly been blessed. I still wonder what I did “right” to deserve such a wonderful fella.

I remember being so mad at the Engineering department for making me take that class over again, but if I hadn’t, we never would have met. So I guess it was meant to be.

And all these years later, he still wonders how it is that I remember “when” our first date was.

In the end, though, from the time of that first date on, I got to have Valentine’s Day every day of the year, so everything worked out. 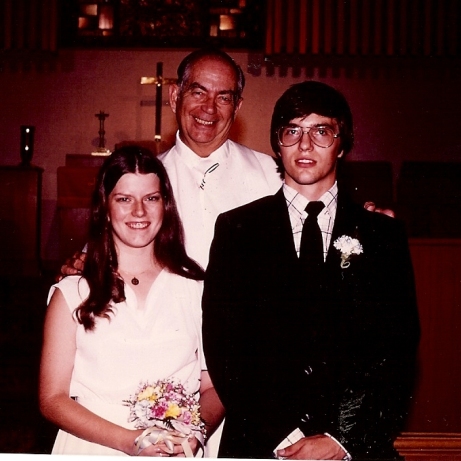 Won’t you be my Valentine?

A short, fat, over-the-hill, happily-married mother of 4 daughters. I know just enough to get myself in trouble....
View all posts by Teresa in Fort Worth, TX →
This entry was posted in Annual Posts, Family, Humor, Just Because, Messin' with my kids, Special Occasions, Sunday Funnies, The Geeks Shall Inherit the Earth and tagged Boy Meets Girl, How I Met Your Mother, How We Met. Bookmark the permalink.