Tuesday Tunes – State of The Union 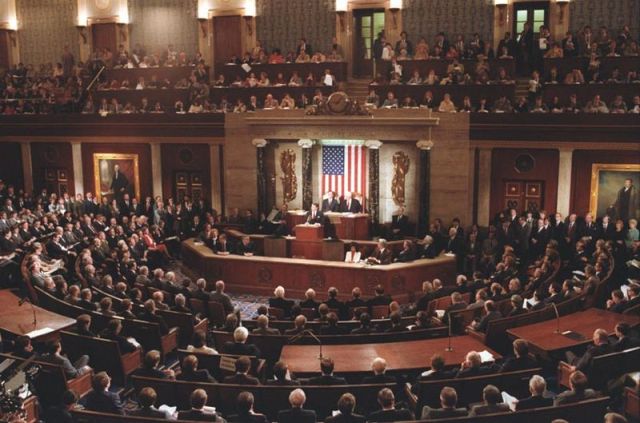 .
Tonight is the annual State of the Union address – today I thought I’d include a few “Presidential” songs. Even though no official music is played at these addresses, I wanted to mark the occasion. Since most of us will never attend any events where this music might be played, I thought it would be nice to give these songs some air time. They’re not very long, but they’re pretty cool.

The group is the U.S. Army Band – also known as “Pershing’s Own“; I hope you like these selections!

.
Next up is the “Presidential Processional”:

.
Like I said, not very long, but I thought you might like to hear all of these together – we don’t have all that much “pomp and circumstance” in American politics, but we do have a couple of songs to go along with the few formalities associated with our presidents…

Speaking of formalities, here’s the protocol of entry for a State of the Union address:

Protocol of entry into House chamber

A formal invitation is made to the President for each State of the Union Address.

By approximately 8:30 pm, the members of the House have gathered in their seats for the joint session. Then, the Deputy Sergeant at Arms addresses the Speaker and loudly announces the Vice President and members of the Senate, who enter and take the seats assigned for them.

The Speaker, and then the Vice President, specify the members of the House and Senate, respectively, who will escort the President into the House chamber.

The Deputy Sergeant at Arms addresses the Speaker again and loudly announces, in order, the Dean of the Diplomatic Corps, the Chief Justice of the United States and the Associate Justices, and the Cabinet, each of whom enters and takes their seats when called. The justices take the seats nearest to the Speaker’s rostrum and adjacent to the sections reserved for the Cabinet and the members of the Joint Chiefs of Staff.

Just after 9 pm, as the President reaches the door to the chamber, House Sergeant at Arms stands just inside the doors, facing the Speaker and waiting for the President to be ready to enter the chamber.

When he is ready, the Sergeant at Arms announces his presence, loudly stating the phrase: “Mister [or Madam] Speaker, the President of the United States!”

As applause and cheering begins, the President slowly walks toward the Speaker’s rostrum, followed by members of his Congressional escort committee….

After he takes his place at the House Clerk’s desk, he hands two manila envelopes previously placed on the desk and containing copies of his address to the Speaker and Vice President.

[T]he Speaker introduces the President to the Representatives and Senators, stating: “Members of [the] Congress, I have the high privilege and [the] distinct honor of presenting to you the President of the United States.”

Have a great day!

A short, fat, over-the-hill, happily-married mother of 4 daughters. I know just enough to get myself in trouble....
View all posts by Teresa in Fort Worth, TX →
This entry was posted in Annual Posts, Holiday/Patriotic, I Love America, Just Because, Music, Tuesday Tunes and tagged Hail to the Chief, State of the Union Address. Bookmark the permalink.

2 Responses to Tuesday Tunes – State of The Union