A Tale of Two Rate Cuts

How do these people manage to keep their heads from exploding?

For the past 24 months or more, all we have heard from Mr. Obama and his crew on Capitol Hill is how we simply MUST let the Bush Tax Cuts expire, because the government will “lose” money if they are extended. (Never mind that that “revenue” won’t really be “lost”, as it was never there to begin with – this is how the Harvard-educated, Nobel-prize-winning “economists” think on that side of the aisle)

All we’ve heard is how “everyone” has to pay “their fair share”.

And yet, in the past couple of weeks, Mr. Obama has been on a tear about how we simply CAN’T let the Stafford Loan Rates expire***, because… 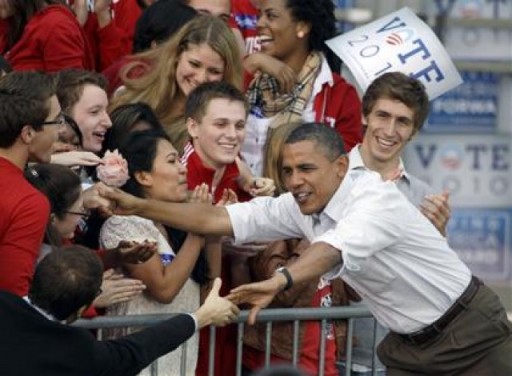 .
My goodness, this couldn’t be a ploy to shore up the “Youth Vote”, could it?

I mean, the same argument about the loss of revenue can be made in the case of these student loans, can’t it? Why is it OK for one set of rates to expire and not another one?

Can you say “Class Warfare”, boys and girls?

Back in 2001 and 2003, sweeping changes were made which lowered tax rates across the board for ALL taxpayers in the United States. Because of the method which was used to pass this legislation, the law was only effective for 10 years. At the end of that time, the rates would automatically revert back to the rates that were in effect in 2001, unless new legislation was passed to extend them further.

.
Now in 2007, a Democratically-held Congress passed legislation that would lower interest rates on Stafford Student Loans – but only for 4 years; apparently they were just fine with the expiration of those low rates to coincide with an election. The irony is that if/when these rates expire, they will go RIGHT BACK to what they were before the legislation was passed.

The Congressional Budget Office estimates that keeping the 3.4 percent rate in effect on subsidized Stafford loans for just one more year would cost $6 billion over 10 years. 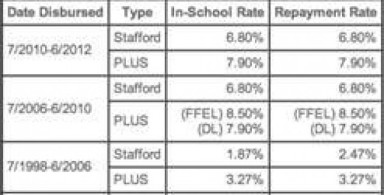 When it comes to student loan rates, Democrats are on record as saying that they are committed to keeping them low:

In a press release Friday, Sen. Tom Harkin, D-Iowa, said, “As chairman of the committee that oversees federal financial aid programs, my top priority is to stop the interest rate on student loans from doubling in July.” He said he will introduce a bill this week that will extend the lower rate “in a fiscally responsible way.”

However, when it comes to tax rates, these same Democrats are dead-set against keeping them low:

U.S. Sen. Tom Harkin, D-Iowa, is seeing a 10-year anniversary he doesn’t like — a decade since a series of tax cuts were signed into law by former President George W. Bush in June 2001. Many lump the 2001 and 2003 tax parings under the “Bush tax cuts” moniker, and Harkin wants to hack them away, after December 2010 votes extended them two more years to the end of 2012.

My goodness, some of them were even against a temporary 2% payroll tax cut THAT THEIR OWN PARTY WAS ENDORSING:

Sen. Tom Harkin slammed his own president and party for hatching the payroll tax cut deal that is expected to pass Congress Friday, saying he’s “embarrassed” the Democrats are pushing a measure that begins the “unravelling of Social Security.”

The bill will extend a 2 percent break in the tax that goes to fund Social Security for the rest of 2012, saving families $1,000 on average.

He was against rate cuts before he was for them - ladies and gentlemen, guard your wallets....

An inconvenient truth for those who are clamoring to have the Bush Tax Cuts expire is that there is ample evidence that these measures allowed the economy to explode in a matter of a few years:

By 2003, Mr. Bush grasped this lesson. In that year, he cut the dividend and capital gains rates to 15 percent each, and the economy responded. In two years, stocks rose 20 percent. In three years, $15 trillion of new wealth was created. The U.S. economy added 8 million new jobs from mid-2003 to early 2007, and the median household increased its wealth by $20,000 in real terms.

But the real jolt for tax-cutting opponents was that the 03 Bush tax cuts also generated a massive increase in federal tax receipts. From 2004 to 2007, federal tax revenues increased by $785 billion, the largest four-year increase in American history. According to the Treasury Department, individual and corporate income tax receipts were up 40 percent in the three years following the Bush tax cuts. And (bonus) the rich paid an even higher percentage of the total tax burden than they had at any time in at least the previous 40 years. This was news to the New York Times, whose astonished editorial board could only describe the gains as a “surprise windfall.”

(Note to the New York Times’ editorial board: Try reading a book or two by Frederich Hayek so that you won’t be “surprised” next time.)

So, let’s wade into the weeds and lay out the Democrats’ position on these issues, shall we?
.

They are FOR extending a 3.4% cut on student loan interest rates, but AGAINST a short-term 2% cut in payroll taxes for every American who brings home a paycheck.

They are FOR extending a 3.4% cut on student loan interest rates, but AGAINST extending a 3.0% cut on the tax rates of every American family that makes more than $68,000/year.

They are FOR extending a 3.4% cut on student loan interest rates, but AGAINST extending a 5% cut on the Capital Gains Tax Rate.

They are AGAINST an increase of 3.4% on student loan interest rates, but FOR creating a new 10% income tax bracket.

They are AGAINST student loan rates doubling, but FOR bringing back the marriage penalty, affecting millions of two-income families.

They are AGAINST student loan rates doubling, but FOR cutting the Child Tax Credit in half, affecting every American family with children.

They are AGAINST student loan rates doubling, but FOR the tax on dividends increasing by 264%.

Apparently, Democrats care more about college students – most of whom pay NOTHING in income taxes – than they do about the millions of hard-working Americans who actually DO pay taxes.

And most taxpayers actually VOTE….
.

.
***Ummmm….scratch that – the Republicans passed a bill on Friday which would keep the Student Loan Rates where they currently are, but Mr. Obama is threatening to veto the bill if it gets to his desk.

A short, fat, over-the-hill, happily-married mother of 4 daughters. I know just enough to get myself in trouble....
View all posts by Teresa in Fort Worth, TX →
This entry was posted in A Wretched Hive of Scum and Villainy, Elections, Liberal Nonsense, Lying Lawyers, Things That Make Me Crazy, Think about it and tagged Bush Tax Cuts, Stafford Loans, Student Loan Interest Rates. Bookmark the permalink.

3 Responses to A Tale of Two Rate Cuts