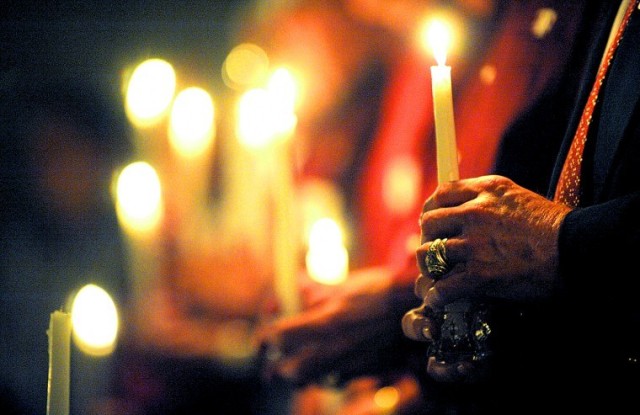 One day our children will answer “Here” for both Paul and me. It is the last thing that the family of an Aggie is called to do for their loved one. It is our sworn duty to do so.

Softly call the Muster,
Let comrade answer, “Here!”
Their spirits hover ‘round us
As if to bring us cheer!

Mark them ‘present’ in our hearts.
We’ll meet some other day
There is no death, but life etern
For our old friends such as they! 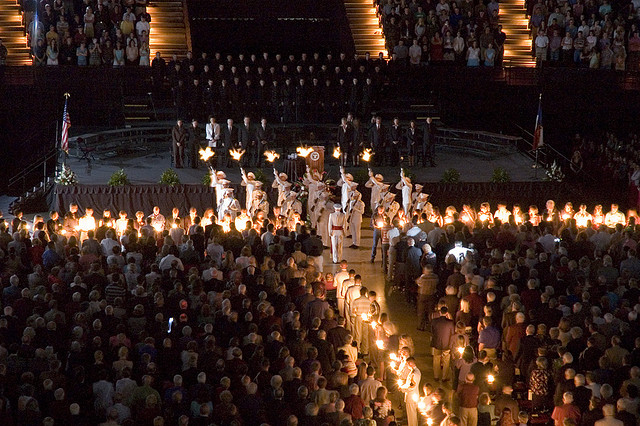 .
Aggie Muster is the most solemn and sacred tradition observed at Texas A&M University.  It celebrates the camaraderie of the school while remembering the lives of Aggies who have died in the past year.

Aggies light candles, and friends and families of Aggies who died that year answer “here” when the name of their loved one is called.  Muster ceremonies today take place in approximately 320 locations globally. The largest muster ceremony occurs on the Texas A&M campus.

Muster is a time to look to the past, present, and future…not only to grieve but to reflect and to celebrate the lives that connect us to one another. A gesture so simple in nature yet so lasting in spirit, Muster is the lasting impression every Aggie leaves with us; it reminds us of the greatness that lies within these walls, of the loyalty we possess, of the connection that binds us, and of the idea that every Aggie has a place of importance – whether they are present in flesh or spirit.

.
In 1883, the Ex-Cadets Association established the “Roll Call for the Absent.” The event grew into a loosely organized annual tradition but did not have a permanent date set aside until several decades later, when it merged with a different tradition.

Beginning April 21, 1903, the tradition of Aggie Muster merged with Texas Independence Day (also known as San Jacinto Day, the anniversary of the Battle of San Jacinto whereby Texas gained its independence from Mexico) on April 21st.  There were both athletic events and banquets to honor alumni. For the next fifteen years, the event would occur unchanged as a day of play and fellowship.

In 1918, however, focus changed from play to the World War. Many former students were in the military, fighting overseas, and were unable to return to campus to bond with their fellow students. A&M President Bizzell encouraged former students and the student body to gather together wherever they were on April 21, becoming the first Aggie administrator to officially support the tradition.
.

.
The most well-known Aggie Muster took place during World War II in 1942 on the Philippine island of Corregidor. At this time, Corregidor was the last American stronghold against the Japanese forces in the Philippines, and Japanese artillery and warplanes were constantly attacking. An estimated 1.8 million pounds of shells pounded the island in one five-hour stretch.

The American artillery commander on Corregidor was Brigadier General George F. Moore, a 1908 graduate of Texas A&M. With the help of Major Tom Dooley, class of 1935, Moore gathered the names of 25 other Aggies under his command. Despite the fierce fighting as the Japanese laid siege to the island, on April 21, 1942 Moore held a roll call—known as muster in army terms—calling the names of each of the Aggies under his command.

Only twelve of the twenty-five survived the battle and the POW camps to which the survivors were sent. Dooley told a United Press correspondent about the gathering, and the reporter sent an article back to the USA about the 25 Aggies who had “Mustered.” The story captured the imagination of the country and “helped boost American spirits at a time a lift was badly needed.”

In April 1945 – just eight weeks after Corregidor had been recaptured by the Allies – three Aggies conducted a Muster “on the Rock.” A year later, on April 21, 1946, an even larger Muster occurred on Corregidor.
.

Muster became a student organization in 1950, and students now coordinate all aspects of the campus Muster in College Station, Texas.
.

It was Judgment Day in Aggieland
And tenseness filled the air;
All knew there was a trip at hand,
But not a soul knew where.

Assembled on the drill field
Was the world-renowned Twelfth Man,
The entire fighting Aggie team
And the famous Aggie Band.

And out in front with Royal Guard
The reviewing party stood;
St. Peter and his angel staff
Were choosing bad from good.

First he surveyed the Aggie team
And in terms of an angel swore,
“By Jove, I do believe I’ve seen
This gallant group before.

I’ve seen them play since way back when,
And they’ve always had the grit;
I’ve seen ‘em lose and I’ve seen ‘em win,
But I’ve never seen ‘em quit.

No need for us to tarry here
Deciding upon their fates;
Tis plain as the halo on my head
That they’ve opened Heaven’s gates.”

And when the Twelfth Man heard this,
They let out a mighty yell
That echoed clear to Heaven
And shook the gates of Hell.

“And what group is this upon the side,”
St. Peter asked his aide,
“That swelled as if to burst with pride
When we our judgment made?”

“Why, sir, that’s the Cadet Corps
That’s known both far and wide
For backing up their fighting team
Whether they won, lost or tied.”

“Well, then,” said St. Peter,
“It’s very plain to me
That within the realms of Heaven
They should spend eternity.

And have the Texas Aggie Band
At once commence to play
For their fates too we must decide
Upon this crucial day.”

And the drum major so hearing
Slowly raised his hand
And said, “Boys, let’s play The Spirit
For the last time in Aggieland.”

And the band poured forth the anthem
In notes both bright and clear
And ten thousand Aggie voices
Sang the song they hold so dear.

And when the band had finished,
St. Peter wiped his eyes
And said, “It’s not so hard to see
They’re meant for Paradise.”

And the colonel of the Cadet Corps said
As he stiffly took his stand,
“It’s just another Corps Trip, boys,
We’ll march in behind the band.”

– (traditionally read as part of every Muster ceremony throughout the world)

A short, fat, over-the-hill, happily-married mother of 4 daughters. I know just enough to get myself in trouble....
View all posts by Teresa in Fort Worth, TX →
This entry was posted in Annual Posts, Holidays, I Love America, Inspirational, Special Occasions, Texas and tagged Aggie Muster, San Jacinto, Texas Independence Day, Traditions. Bookmark the permalink.