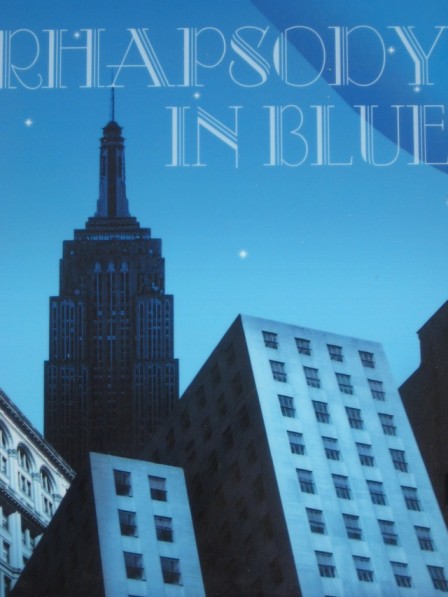 I, too, had only ever heard the big symphonic version but a few years ago, I ran across an amazing Big Band arrangement that brought a big smile to my face. And a couple of days later, I ran across the “original” jazz band version, which I found I like very, very much.

The complete piece is 16 minutes long, so if you don’t have time, don’t feel that you have to listen to all of them; you might want to sample a bit of each one and come back to them later when you have more time. I think you will probably find that, like me, you end up enjoying all of them on their own merits.

First up, Gordon Goodwin’s Big Phat Band does a rousing rendition of “Rhapsody” – this adaptation won the Grammy for “Best Instrumental Arrangement” in 2012.  It’s amazing how this piece lends itself to all kinds of interpretation without losing any of its flavor – this shortened version of Gershwin’s original composition is a lot of fun:

Next, Andrew Litton (on piano AND conducting) and the Dallas Symphony Orchestra in their 1996 recording of the “Rhapsody” as originally performed when it premiered in 1924 (a smaller “Jazz Band” orchestration) :

I ran across two utterly charming versions of “Rhapsody in Blue” while looking for videos to include in this post. Here’s one as animated by the wizards at Disney for Fantasia 2000:

And here’s a really cute one that was made (I think) as an homage to an up-and-coming young pianist in the UK, Benjamin Grosvenor (and yes, now I have another album that I’m going to have to add to my Wish List…)

I think that Mr. Gershwin would love this young man’s interpretation of his now-classic piece:

Here is the “standard” version – the version most people are used to hearing – the recording Leonard Bernstein made with the Columbia Symphony Orchestra in 1959.

The YouTube video is a work of art in itself; a love letter to New York City. I don’t know about you, but for some reason “Rhapsody” and the city are inseparably intertwined; whenever I hear a snippet of the song, I think, “New York City”:

And finally, here is Bernstein himself, playing and conducting the New York Philharmonic at the Royal Albert Hall in 1976:

I hope you enjoyed this little musical interlude as much as I did!

P.S.  Here’s a video of a VERY young Andrew Litton (c.1980, 21 years old) playing “Rhapsody” live in Moscow, along with 2 curtain calls (“I’ve Got Rhythm” and “Prelude No. 2”), as well as an interesting article about Litton’s love of Gershwin’s music.

A short, fat, over-the-hill, happily-married mother of 4 daughters. I know just enough to get myself in trouble....
View all posts by Teresa in Fort Worth, TX →
This entry was posted in Classical, Contemporary, I Love America, Just Because, Music and tagged Andrew Litton, Big Phat Band, Dallas Symphony Orchestra, George Gershwin, Gordon Goodwin, Leonard Bernstein, Rhapsody in Blue. Bookmark the permalink.