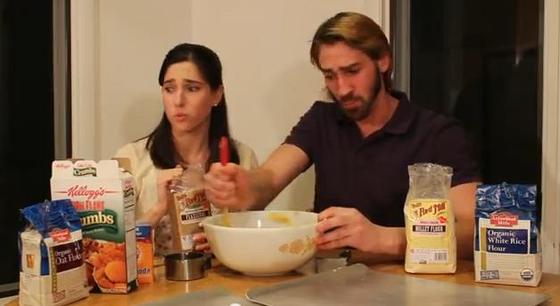 ….We’ll discover foods that even vegans have forsworn…..

As anyone with food allergies knows, navigating restaurants and grocery stores can be a real challenge – especially when you are first starting out. When Rebecca was diagnosed with Celiac Disease in 2008, we got a crash course in gluten-free living and “Alternative Foods” – it’s been a real education!

I have to give credit to all of our friends and family – they’ve been very patient with us on this journey, and they are always sending us stuff that they think might be of interest to us. Yesterday I opened my e-mail and discovered this link from one of my Cyberfriends***:
.

.
Now, I would be remiss if I didn’t include a link to the post by Michael Bihovsky (the multi-talented creator/director/star of this video) about how “One Grain More” came to be:

It all began on New Year’s Eve.

Mournful of the fact that I would be unable to enjoy any party desserts due to my recently discovered allergy to pretty much everything, I began baking myself some chocolate chip cookies made of neither wheat nor chocolate chips. I was listening to Les Misérables at the time, and as I tend to do, I was singing along, inserting some of my current activities into the lyrics of the song “One Day More.” When I sang the part about “This never-ending road to gluten free,” I immediately cancelled my plans for the evening and started writing….. 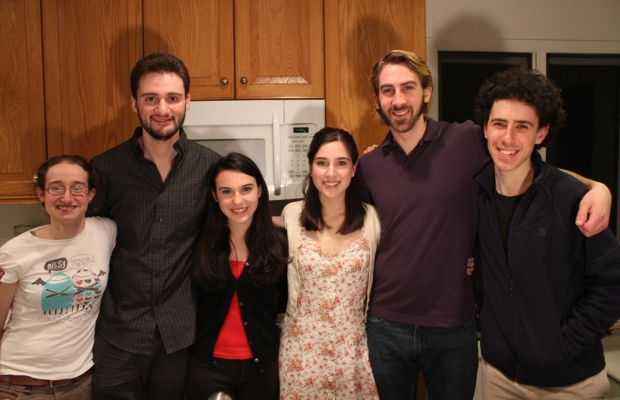 I HAD to include the lyrics, because they are absolutely brilliant!  (I also like that they renamed Epinone “EpiPen” – a masterful touch….)

MARIUS & COSETTE Will I ever eat again?

MARIUS & COSETTE What I’d give for pizza pie

MARIUS & COSETTE Or a slice of beef on rye…

EPIPEN Wond’ring how you milk an oat

VALJEAN It’s so good to see you, Quinoa!
You’re the protein source I chose
Still, you look as if I’ve seen ya
Coming out of someone’s nose

MARIUS & COSETTE Flax instead of eggs
Try to make it whip
Now what do we use instead of chocolate chips?
Carob doesn’t work
Carob is a trap
Anyone who’s had it knows it tastes like crap!

VALJEAN & EPIPEN When the hell is this stuff dated?

COSETTE What on earth is “lecithin”?

ALL Do you hear the people sneeze
And cough
And wheeze
From allergies?

MARIUS (simul) So I added wheat — I’m sorry
We still had some left in stock
Nothing says “it’s time to party”
Like anaphylactic shock
So I guess this must be Quinoa
It’s not so gross, I suppose
Still it looks as if I’ve seen ya…

COSETTE (simul) Will I ever eat again?
What if there’s a trace of tree nuts?
Someone get my Epi-pen
I’m not supposed to breathe in peanuts!

EPIPEN (simul) Have you ever milked an oat?
Guess it’s better than a goat
Try a little nog
Smoother than a silk
Even though it’s made of neither eggs nor milk!
Have another roll
Harder than a rock
Better hold your breath because it tastes like-

ALL Tomorrow we’ll discover foods
That even vegans have forsworn!
Wish me luck…..
Mother(BLEEEEEEEEEP)
One grain more…

***Thanks to my FIF Connie Gorton, who sent me the link to this video – you owe me a new keyboard, dear one!  (One of these days, we’re gonna meet “in real life”, and it’s gonna be awesome 😛 )

A short, fat, over-the-hill, happily-married mother of 4 daughters. I know just enough to get myself in trouble....
View all posts by Teresa in Fort Worth, TX →
This entry was posted in Broadway/TV/Film, Humor, I Love America, Music, The Geeks Shall Inherit the Earth and tagged Food Allergies, Gluten Free, Michael Bihovsky, One Day More, One Grain More. Bookmark the permalink.

3 Responses to “One Grain More” (aka Making Food Allergies Fun)